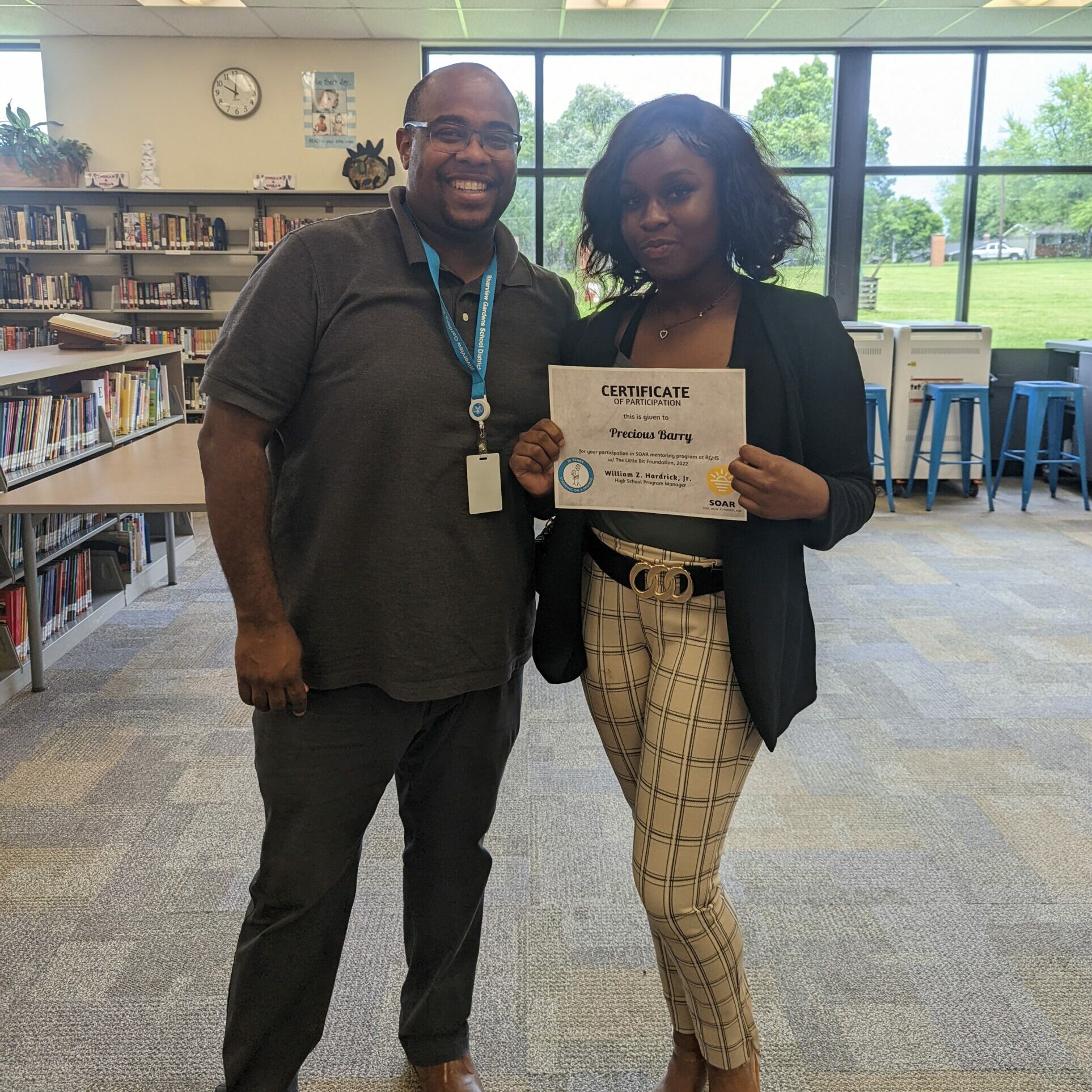 Listen first, speak second. It’s the most important technique that Little Bit Senior Program Manager of College and Career Readiness, William Hardrick, Jr., advises the SOAR mentors to use. “Trust is the pillar of mentoring and when someone, especially a young person, feels they’re being listened to without any judgment, you’re more likely to develop a trust relationship,” says Hardrick. After his first year as a SOAR mentor, Ron Tremayne describes the process as a journey.  “William and Little Bit have put together a great program that requires time and patience to work for a young person juggling a lot of issues in their life,” he says.

Tremayne’s wife, Robin, has been Little Bit’s lead seamstress for about eight years. “She was always telling me ‘You have to get involved,’ so when I was able to cut back on my work hours and learned about the mentor program, I signed up,” he says. “I remember calling William after the first day and being so motivated.”

The SOAR (Seek. Own. Advocate. Rise.) mentor program matches up Little Bit volunteer mentors with high schools students to assist them in being successful in school and in planning for their future. Mentors meet with their students on campus every other week.

Despite stops and starts due to COVID quarantines, Tremayne says he made connections during his first year, which he hopes were helpful. “Our role really is to show students the options available to them and help them get where they want to be,” he says. “Sometimes, that’s also helping them think differently about things, such as the young man who wants to run his own business someday but was discouraged that it would require him to go to college. I asked him if he ever thought about businesses that he could start on his own that provide a needed service in the community, such as lawn care or window washing, showed him how you can get an LLC and just encouraged him that you don’t always have to follow a traditional path.”

SOAR mentor Greg Williams says he’s there because he’s always believed in the power of mentorship. The Director of Client Development for S.M. Wilson has been a Boy Scout leader and soccer coach. “This was another way to put my belief into practice,” he says. “Even if you don’t think you have anything to offer – I don’t know that I have any specific skills – if you can listen to a kid and find a way to connect, they’re going to remember that you cared.”

When Williams first met Cameron, a sophomore, there was not an immediate connection, he admits. “He really didn’t say much and had his earphones in so I wasn’t sure he was listening,” says Williams. “But never underestimate a kid; he was definitely paying attention.” Williams eventually discovered that Cameron is the chef of his family and began sharing recipes with him. He learned that Cameron was thinking about programming for a future career and wanted to find a part-time job. After a few weeks, they were mapping out job openings within a quarter mile of Cameron’s home, so that transportation wouldn’t be a problem, and preparing him for an interview with a local business.

“I’m super proud of his growth and hope to work with him again next year,” says Williams. Before parting for the summer, Williams handed Cameron a blank journal – “journaling my thoughts, ideas and fears is something I try to do every day,” he says – along with the seven skills he believes that if mastered will lead to success regardless of the career path, such as critical thinking, adaptability and “showing up.”

“There are so many kids who don’t have the same opportunities as others…that start out behind the eight ball,” says Williams. “While we work as a community to remove those barriers, we can help students find a way around the eight ball to the possibilities before them.”