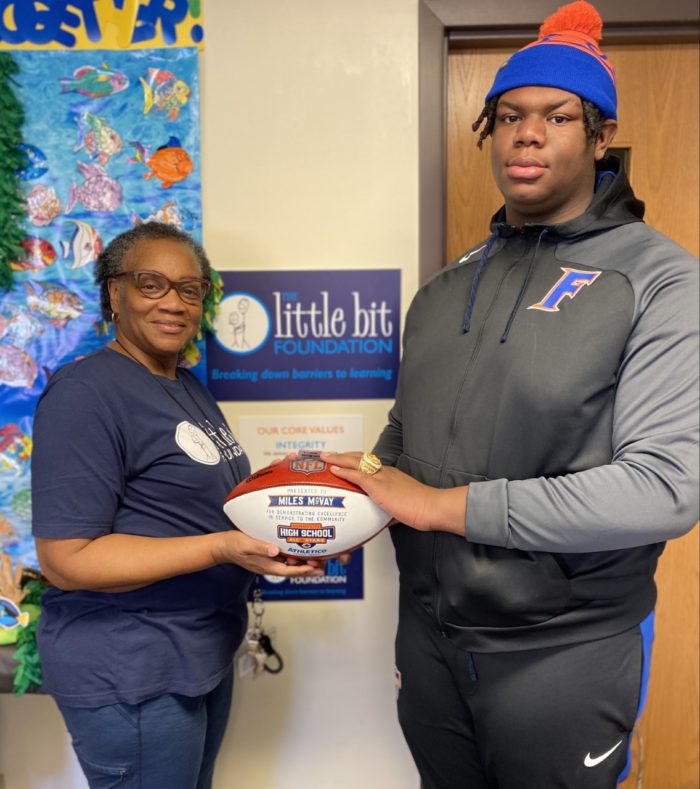 “Never take things for granted. When you’re blessed, it’s important to think of those who may not have what you do. I’m blessed to have a really great support network,” says Miles McVay. The 6’7”, 336 lb. sophomore and offensive lineman at East St. Louis High School was recently honored for his outstanding performance in the classroom and positive impact in the community with the Chicago Bears Community High School All-Star Award.  Part of the award includes a $500 donation to the charitable organization of his choice.

“I chose Little Bit because I remember how they helped me and because I made a promise to my Auntie,” says McVay, who says he received school supplies from Little Bit while attending NorthSide Community School from PreK through 5th grade. His aunt, Jeanne’ Bryant, has been with NorthSide for about 10 years and is currently office secretary at the Early Childhood Center. There was a day when the talented football player asked her what she wanted if he ever made it to the NFL and she responded that nothing else was needed, just a donation to The Little Bit Foundation. “This way, I get to do it early,” he says.

“Little Bit is the best thing that’s happened to schools,” says Bryant. “Our babies need every positive thing they can receive and Little Bit is always here to provide for whatever they may need. I get choked up whenever I talk about them, because I wish every child could benefit from their kindness.”

Bryant says McVay’s family – a tight-knit group – is always encouraging him to stay on the right track and to give back when and where he can. Lately, McVay has been helping churches and other groups in the Dellwood and Ferguson neighborhoods distribute food during the pandemic, and is a regular volunteer with the Demetrious Johnson Foundation. Pre-COVID, he also routinely volunteered at NorthSide to help out Bryant in the office and to read and talk to the young students.

“I wasn’t the best behaved kid in school, so I try to talk to them about working hard and not looking for attention by acting up, but by being themselves and doing the right things,” says McVay. The hard work has paid off for McVay, who maintains a 3.6 GPA and is already weighing football scholarship offers from eight different D1 schools. He also had opportunity to meet (via Zoom) with Hall of Fame linebacker Mike Singletary as part of the Bears All-Star award.

“We’re very, very proud of the man he’s becoming and excited to see where God leads him,” says Bryant.