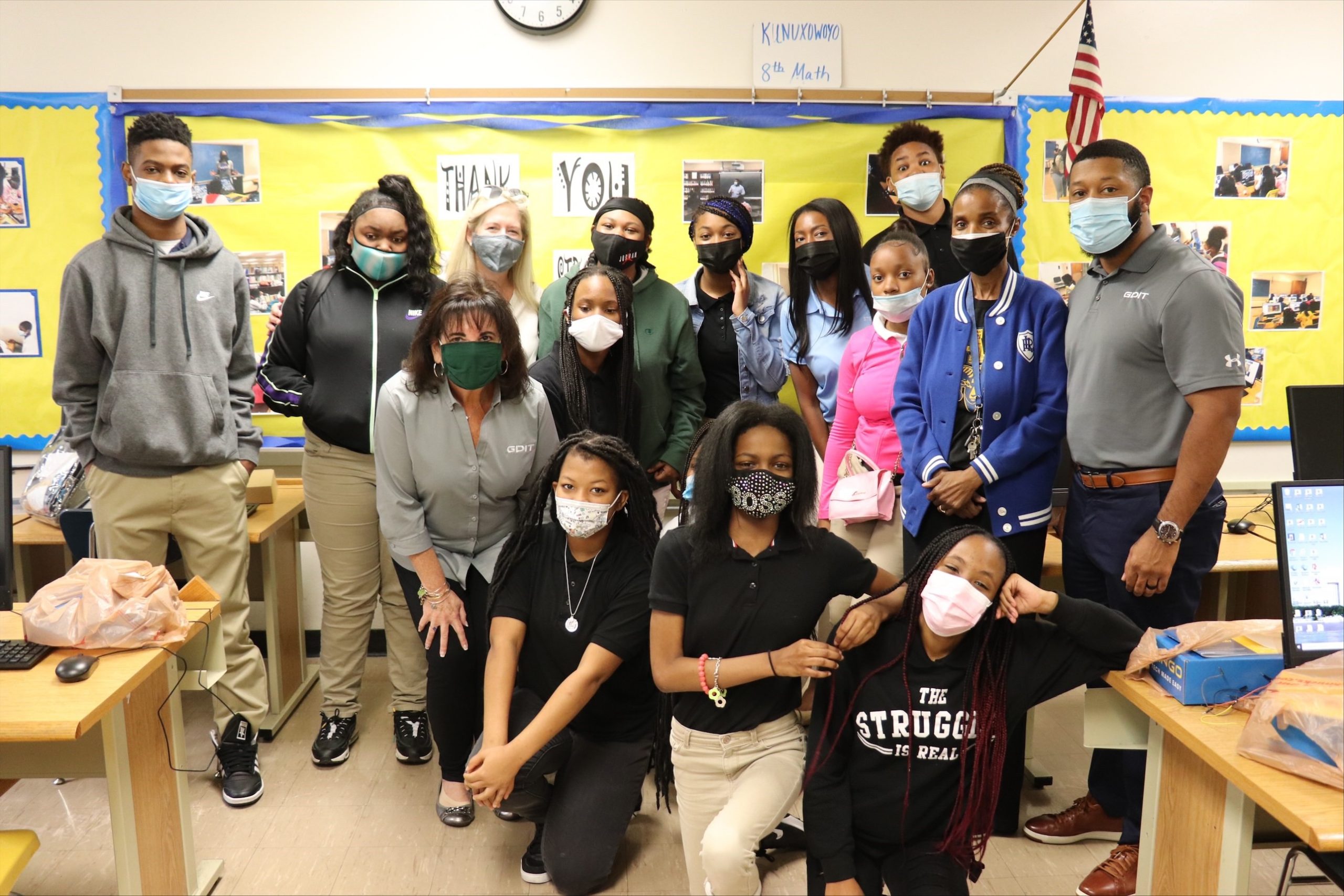 General Dynamics Information Technology (GDIT) is passionate about investing in the communities where its employees work and live. Headquartered just outside the nation’s capital, the IT business unit of General Dynamics – a global aerospace and defense company – has been growing steadily in St. Louis and recently opened a new office in the Cortex Innovation Community. “We’re thrilled to be expanding in St. Louis and collaborating with local government, academia, businesses and community organizations to grow the technology workforce in the region, particularly in the geospatial domain,” says Deb Davis, Vice President and General Manager with GDIT. “I’m especially excited about partnering with The Little Bit Foundation!”

Davis (pictured, back row 3rd from left, at Central Middle School) says she and her team reached out to their STLMade partner when looking for the right St. Louis organization to engage with in the community. STLMade’s Senior Vice President, Jim Alexander, referred them to The Little Bit Foundation based on a common vision. “We want to reach young people early and get them interested in STEM and the geospatial industry – which is really an exploding field – and they suggested we may find alignment with Little Bit,” she says. After meeting with Little Bit leadership, touring the headquarters and hearing about plans for helping students cultivate career pathways, she says there was an instant connection.

“I had no idea about the breadth of services The Little Bit Foundation provides. The concept of serving the whole child and working to make sure barriers to learning are removed is really powerful,” says Davis. Her team began strategizing with The Little Bit Foundation about ways to work together, and one of the immediate steps, she says, was to sign on as a presenting sponsor for the Join the Journey Gala and invite many of their community and industry partners to the event. “We are thrilled to support ‘the journey’ and to bring our partners to the table to learn more about this incredible organization.”

Additionally, Davis says GDIT held a drive for Little Bit among several of its U.S. facilities, collecting over 1,500 school supplies. Even more exciting, she says, was the opportunity to fly one of GDIT’s program managers, Corey Carter– a 2021 recipient of the “Black Engineer of the Year Modern Day Technology Leader Award” – to St. Louis to speak to students from Riverview Gardens School District. “Corey called me up after his trip and said, ‘My heart is full.’”

Earlier this month, GDIT also brought STEMLingo to students at Central Middle School, which is a hands-on, self-paced, introductory coding kit created by STEMBoard. The founder of STEMBoard, Aisha Bowe, was on hand to walk students through the components and the activities they could continue at home. “It was so rewarding to see how engaged and excited the students were, and to hear the sense of pride as they shared their accomplishments. When they can see and touch what STEM is, they can envision a future in STEM,” says Davis. “We’ve loved getting to know Little Bit and look forward to more ways we can help expose students to all of the exciting opportunities St Louis has to offer them!”

On July 26, The Little Bit Foundation headquarters were severely damaged by flood waters. Until further notice, our offices and warehouse will be closed to visitors, volunteers and item donations. Please follow us on social media or sign up for our newsletter to stay up to date on our progress with reopening and ways you can help. Thank you for your outpouring of love and concern, and your continued support of Little Bit. The mission continues! Donate to Flood Assistance.